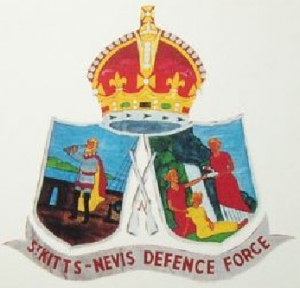 The mission of the St Kitts Nevis Defence Force (SKNDF) is to to defend the territorial integrity and sovereignty of St. Kitts Nevis to include Aid to the Civil Authority, Fisheries Protection, Drug Interdiction and Human Relief
and Operations and to Promote Regional Peace

Our steadfast resolve to succeed in whatever we do, exemplifying boldness of action, decisiveness, and stamina to overcome obstacles and achieve our mission despite the odds. It is our aggressive fighting spirit, the tenacity and strength of character without which we will never prevail in battle.  It is the inner strength that leads us as soldiers and citizens to do what is right over what is popular.

The St. Kitts Nevis Defence Force origins are in the Portuguese Riots of 1896 when workers at Needsmust
Estate went on strike for higher wages. Rioters burnt sugar estates, looted and burnt stores (many owned by Portuguese entrepreneurs) in Basseterre. The police force proved ineffective in restoring peace and British
marines were called in to quell the disturbance. The Volunteer Ordinance of 2nd June 1896 established the Force “for internal defence.’’

On 10 June 1967, Anguillan dissidents supported by American mercenaries invaded St. Kitts and linked up with locals in opposition to the government of Sir Robert Bradshaw.  The invasion was repulsed by the SKNDF, and led to the establishment of a regular force on 31 May 1967, giving St. Kitts and Nevis the distinction of being the first Commonwealth Caribbean Island in the Leeward Islands to institute a “regular core” of full time soldiers.  The regular force was embodied as the then government felt that the existing Defence Force comprising of volunteers were inadequately trained and poorly armed.

This newly constituted force remained standing until September 1981, when it was disbanded by the PAM
administration of Dr Kennedy Simmonds.

The present Force was re-established in 1997 by the Defence Force Act No10 of 1997, with the expressed
purpose of assisting the police in combating the illegal narcotics trade, crime fighting and maintaining the
territorial integrity of the Federation.  The Force has a regional role [through the Regional Security System (RSS)] that goes beyond security duties to encompass humanitarian assistance and disaster relief duties.